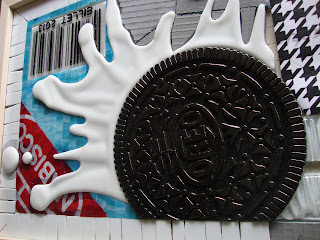 OK, first of all, this is not nearly finished.  I hardly ever show my mosaics ungrouted because they are like unfinished paintings.  This will look WAY better with grout but you can see where I am going.  This is the top half of my oreo mosaic and the bottom will be mostly stuff like my stripes and bubbles.  Hope this is done in about a week, who knows?  But YES, I finished my video for my last piece.  Here's the link to MEEP believing. on youtube.

Posted by lindabillet at 2:54 PM 2 comments: 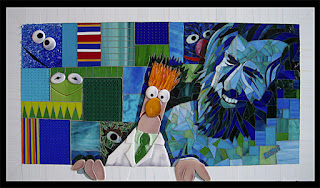 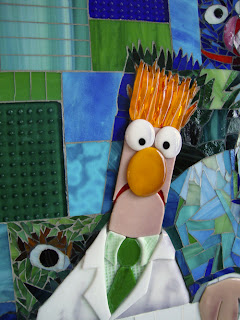 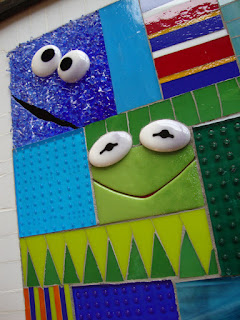 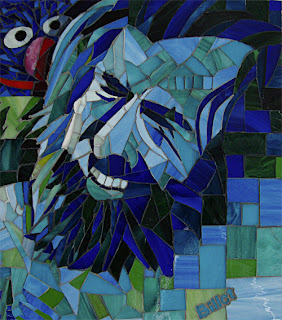 I have been at this (hot and heavy) since before Christmas.  I gotta explain why I chose to do Jim Henson as my first ever actual portrait.  I have always been a Henson fan but when he featured David Bowie in a full length movie, that put me over the edge.  Think about this:  What kind of nutter thinks they can puppet for a living?  As a young man, what do you think his friends and fam thought when he probably talked about his ambitions?  Serious props to this guy.


Now I know you shouldn't judge a muppet by the color of his fur but I am biased when it comes to blue and green.  Besides that, I just think it is cool to add a glass beaker!  Yunk yunk.  I hope to finish a video of this shortly.  Fingers crossed.

I have been criticized for my philosophies but I am finding more often than not that the people that I admire have the same thinking.  Just google Henson quotes and you could learn a lot.  I'll leave you with his most famous. "Life's like a movie, write your own ending. Keep believing, keep pretending."  Amen, Jim!  I'll do just that.