what you do while your kiln is busted! 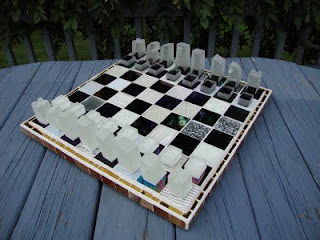 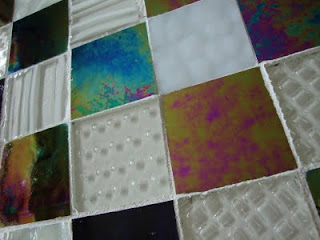 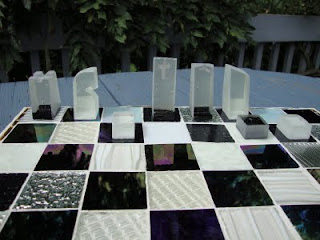 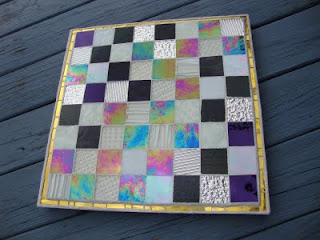 I was waiting on a part for my kiln which I finally got switched today. Even with the new part, it doesn't work. I ran it through a program with something in. I won't know till tomorrow if the piece I have in cracked because the kiln shut off too soon.
But while I have only small kilns, I figure it is a good time to mosaic! I made this black and white chess set. Some of the black glass is iridescent so depending on how the light hits, it goes Seuss on you. I used a lot of my bubble and striped glass in both black and white. Hard to see in these photos. I cut the chess pieces with a tile saw!
Posted by lindabillet at 6:38 PM No comments:

These were inspired by a guy from VA Beach. He thought it would be cool to hang a bunch of pendants on the wall. At that time, I was thinking about small works for an upcoming exhibit where all work entered had to be less than 12 inches any direction. So thinking about a row of pendants, I came up with what I call "straws." These little guys are 5x10 each-not including the frame. This week I will take them to Lebanon Picture Frame and Fine Art Gallery http://lebanonpictureframe.synthasite.com/events.php for their "12 and Under" group show in September. I'm hoping they keep all three. If you haven't been to Lebanon in a while, you'll be surprised at how beautiful the historic downtown Lebanon has become. This gallery, in particular, is georgeous! Their first friday event will be Sept 4th. I'll be there. Come if you can!
Posted by lindabillet at 7:36 AM No comments:

The Ugly Side of Art Shows When I quit the post office I thought I was done with the mailman tan. I hardly see this as a step up. Mount Gretna Art Festival was STEAMY! Good news is that I got a "judges choice" award AND a "top ten" award. To avoid at least one smart comment I will say-YES, there were more than ten artists.

Next show is at the beach so I can go barefoot. Maybe my feet can get back to their normal hobbit charm.
Posted by lindabillet at 7:01 AM No comments:

OK so this week was supposed to be about making more light curves, and finishing the mobile. Didn't seem too tough but the week started off with my saw needing repair. Once I got that fixed, I finished the glass for the mobile. Now, I have a whole new respect for Steve Austin because making mobiles is tedious at best. Besides that, I've decided that once finished, they would not travel well so they would be inappropriate for shows!

The light curves proved to be equally taxing. I had three done but had started with five. Two broke in the final firing. While trying to photograph the remaining three, another broke! What a pain in the glass. So there are two in right now for their final firing. If all goes well, I will have four in the AM.
Posted by lindabillet at 7:53 PM No comments:

What a busy month! I have a few things I am trying to accomplish as I am getting ready for the Mt Gretna Art Festival http://www.mtgretnaarts.com/ Aug 15th and 16th. The reason Mt Gretna is so fun is because it is one of the few shows that is close enough to home that my friends and fam can all go.

I have been trying to figure out the glass I would do for a mobile and I think I have it. It should be done by the show. I had wanted it done by last show!

Started doing a glass curve that can sit in a window or in front of a light. I have three finshed and I am REALLY happy with them. I'm hoping to also have some for gallery night this month at 2nd Floor Gallery http://www.2ndfloorgallery.com/ .

Besides that, I just finished making the sink for one of my bathrooms, I need to drill the hole in the bottom yet. I LOVE it. Of course, it's blue! Pictures will follow.
Posted by lindabillet at 11:07 AM 1 comment: