this is the good stuff 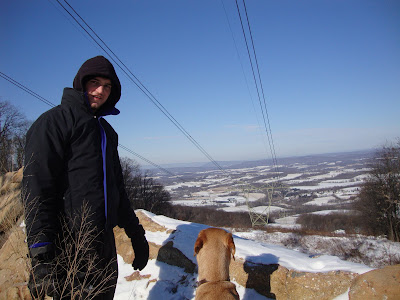 OK, this has nothing to do with art .......but it has everything to do with art. Today was pretty epic for a Monday. Kaleo pops in this morning and announces that he's going for a short hike. "Mom, you should go along." Yeah great, except it is 7 degrees outside! First, I tell him all the reasons why his idea was crazy, then about ten minutes later I was as bundled as he was and we are on the road toward the Appalachian Trail. After we parked, we hiked two miles in to see the two vistas that were our morning's destination. The place is called Shock Rock. I don't remember a time that I have ever hiked in winter, especially when it was well below freezing. It was definitely a different view than I am used to. At one point Kaleo realized that he had not brought a container for his dog, Diego, to drink from. So Diego drinks from Kaleo's Camelbak. Then he offers me a drink from the Camelbak. Yum. I've seen some of the places where that dog's mouth has been. When I made a face, Kaleo tells me that he took the mouthpiece off for Diego. I roll my eyes and yeah, I drank it. Tasty.

So what does this have to do with art? Well since the beginning of the year, I have been working on the same piece, Oprah Cola. It is taking really long because I am doing a video of it. Part of the design was a huge palm sized bottle cap. I've already scrapped 7 bottle caps along with a couple hundred dollars worth of materials that the caps were made of, not to mention the time and electric I spent. I now have three small caps that are almost finished. Fingers crossed. So I'm pressing to get this done. I'm so excited to see if the end result is what I have been thinking about for a year or more. While I'm so close to the finish line is when Kaleo asked me to go hiking. The thing is that the hike was SO what I needed. When one works for themselves, especially if they work from home, they really rarely stop working.....especially if they are in love with their job as I am. The hike made me stop and breathe. Kaleo and I always bounce ideas off of each other, usually talking about life. He calls it vibing. It was great to spend the day with one of the greatest people in the whole world. When I started back on the bottle caps, I had new energy which I hope will be evident in the finished work.

At the end of the day, I'm thinking that there may be a possibility that Kaleo is not actually the best son in the whole world. Maybe my dogs are not the funniest, cutest dogs that ever lived. What if my daughter is not really the wittiest or Rob the best husband as I feel they are? Maybe they are just right for me. I always felt that I was a person who saw the glass half full. But now while everyone is deciding between half empty or half full, I'm looking past the glass at the waitress on the way with a pitcher. For me, half full is just the temporary joy ride to full. If you're still reading this sappy happy horse shit, then think of this- How much happier would you be if you just loved what you already have? Nothing wrong with wanting more. I do. But while you are making more happen, just notice what you already HAVE! Today's hike would have been much more enjoyable with another 60 degrees on top of the 7 but it was still freaking fab. There are definitely faults in each of my loved ones, especially the four legged ones. I wouldn't trade any of these guys. I see SO much good in them. The cherry on top of my day was when Kaleo called me this afternoon to say thanks for hiking with him cause he had a great day that also made him do some soul searching. This is the good stuff.

Posted by lindabillet at 4:42 AM No comments: 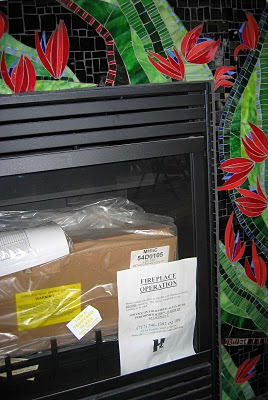 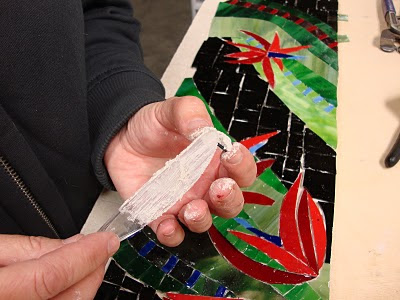 2011 is already sweet. I was thinking about how weird it is that I love my job so much. I mean, I put in at least twice the hours of my previous job. I am WAY dirtier. I just finished my part of a mosaic fireplace surround and the top photo is a rough one because the project is not finished. But in the past couple of days I was thinking a lot. The last day of setting tile, I was at it till 8p so I could get the grout done the next day. I knew I needed to get a good sleep on because I was starting first thing in the morning with black grout on black glass....definitely a task wearing my prescription lenses! So at ass-0-clock in the morning my eyes pop open and I zone there in the dark unable to sleep. It wasn't because I was worried or dreading grouting. I knew I already had a few tiny cuts on my fingers and would receive plenty more the next day. Glass cut into thin triangle shards goes right through plastic gloves and skin without you feeling it. It will sting when the grout starts caking in it. But the reason I couldn't sleep is because I just couldn't wait to see all the mucked up mess of glass snips in the bottom photo turn into the result in the top photo. Even more than that, I couldn't wait till the owner of the fireplace saw it. Nothing compares to that high. Everybody has their personal legend that would only be fun for them.
So besides that, Shaundi and I cut out sugar, salt, dairy, alcohol, caffeine, white flour, and really anything processed for 30 days. Think about everything that contains those being eliminated. Mind boggling. But the great thing is that my husband who is NOT doing the same 30 day hoopla (and is absolutely NOT in favor of us doing it) made like the best dinner ever without any of those ingredients. On top of everything else, I got an email from Paris from somebody who liked my youtube video. Thanks, Sanem! Great start in January!

Posted by lindabillet at 7:11 AM No comments: 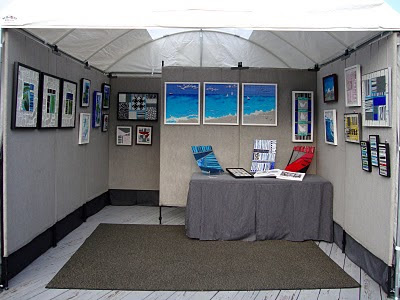 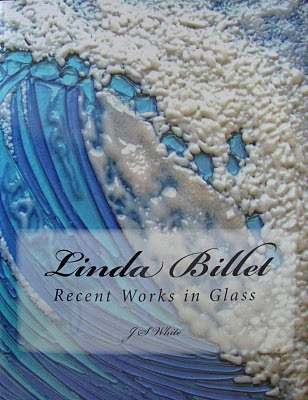 I know I have so far to go but I am really enjoying this journey. I was just looking through my blog from 2010 and sometimes I forget all the really fantastic things that have been handed to me. I had not even written in my blog yet about my book that Sunbury Press published. How cool is THAT! Search Linda Billet on Amazon and MY book comes up. Crazy! Or how about this.... My friend, Christine Goldbeck, had her Arts on Union Gallery featured on Fox43 and she had me and my artwork on the news! HERE is the link to the segment. OK, so there are signs of growth too. Back in January I wrote about having the good fortune of finding used pro-panels close by in just the color I wanted. Well just recently, Rob decided that we needed a better tent and I swear, within hours, a tent that was used twice went up for sale close by. Is that Universal support or what?!!??
There was the feature in the awesome book, Art Glass Today, a full page photo of Not So Pretty Now in a mag, a newspaper article, an online mag, and at least four blogs featured my work. I made it to Brooklyn (and even got People's Choice in the show) which led to other opportunities in Brooklyn and I hope for MORE. OMG, the library project! Still gushing about that one......AND the video about it with Kaleo's music. The next video will have his music also and it's already started. I CAN'T WAIT till that is done.
So yeah, I definitely took big lumps in 2010. I can truthfully tell you that I am grateful for them all because each provided necessary lessons. I have learned SO much this year. You will see it in 2011, I promise.
Posted by lindabillet at 5:14 AM No comments: